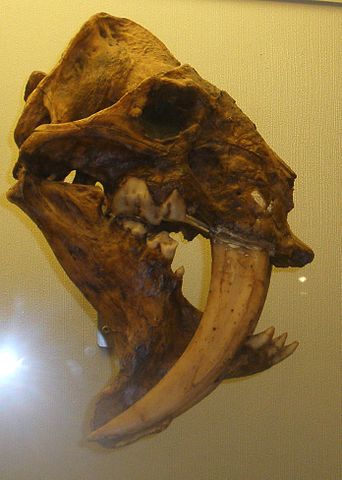 Combine a lion and a bear and give the resulting animal a set of these choppers.

Congratulations! You have just glimpsed Barbourofelis frickii, the biggest and baddest of a line of sabertooths that most of us never knew existed: the barbourofelids.

They are interesting in their own right, though even experts know very little about them. (And very few illustrations are available for public use.)

But barbourofelids were also sabertoothed cat-like apex predators at a time when both sides of family Felidae — sabercats and the ancestors of today’s cats — were first appearing on the scene.

Barbourofelids must have had a profound impact on cat evolution.

But I cannot find any information about that at all.

Here is what I have learned about them.

This intriguing group didn’t start off as the terrifying B. frickii.

At first, they were lynx-sized and not quite so long in the tooth. A couple of species might not even have had saberteeth! (Werdelin et al.)

Barbourofelid fossils are scarce, but enough have been found to show that they probably came from Africa.

Barbourofelids eventually spread over all continents (except South America and Antarctica, as far as we know) and lasted for some 11 million years.

That’s a very successful run for any mammal species.

It’s hard to say, despite “felis” being part of their name.

They certainly had a feline look, but barbourofelids lacked some of the subtle skull features that define true felids.

When their fossils were first described in the 1970s, it seemed likely that barbourofelids were nimravids, though millions of years separate the two groups in North America.

But once again, barbourofelids were missing some subtle defining characteristics of family Nimravidae.

In the meantime, paleoartist Mauricio Anton, whose book on sabertooths I used as a reference, has some realistic reconstructions of barbourofelids online at his blog.

One difficulty in trying to understand these cat-like apex predators is their era.

It was a time when Earth transitioned from a more-or-less tropical world (though no longer a Cretaceous-like greenhouse) to a much drier, more seasonal place.

Here’s just one example. At different times on the barbourofelids’ watch, what’s now London, England, had a subtropical climate like modern Singapore’s (Prothero) and Antarctica iced over completely.

There was just so much stuff going on geologically, biologically, and environmentally — even a flood basalt eruption in the Pacific Northwest!

And throughout it all, animals were interacting and evolving in ways that we can only speculate about, given the very few fossils that have come down to us.

Still, we need to know about sabertooths, so I’m going to use an analogy here to try to put barbourofelids and the first sabercats in perspective.

Bridge over the River Time

Now let’s imagine it walking across a one-way toll bridge between two river banks. It’s walking towards us — we’re on the Neogene side, while street signs on the far shore all read “Paleogene.”

The fearsome barbourofelid and a few other apex predators dominate the roadway like semis in automobile traffic.

But there is also some foot traffic coming our way on either side of the road, including the Dawn Cat and Pseudaelurus near the Paleogene end and, closer to us, what look like big cats — lots of different kinds — with their upper fangs showing.

Disturbingly, the nearest of these cats are the largest and also have very obvious saberteeth, though not as long as those on B. fricki.

Some of these walkers (who all try to keep away from B. fricki) are difficult to classify, but most seem to fit into one of two tribes.

The barbourofelid is going down! Yes, B. fricki has unexpectedly collapsed, just tens of feet from the toll booth.

We don’t know why, but the barbourofelids are now off the bridge forever.

Sabercats take this opportunity to start switching over to the road from the sidewalk.

Then they join a crowd that has gathered around the Neogene toll booth.

What’s going on there?

Oh. Apparently the toll is higher than many of these animals, particularly the carnivores, can pay.

And there go the lights.

Well, it’s night now, so we’ll have to wait until morning to see how it all turns out.

But when morning comes, all we see is a different sabercat: Homotherium, our long-legged ice-age friend.

It is already far past the toll booth and loping down the road that leads on into the Neogene.

We wait around for a while and are eventually rewarded with the sight of Megantereon, Smilodon’s forebear, emerging from the bushes (beyond the toll booths) and stalking away into the Neogene after Homotherium.

Meanwhile, “normal” cats — the founders of all modern cat lineages — are thronging to the road and marching cautiously but proudly down it after the two sabercats, enjoying prominence for the very first time.

Who let them in? It’s a mystery. The rocky archives show the presence of a few “conical-toothed” cats (as opposed to sabertoothed cats) early on, but they become much more common now.

And what happened overnight at the toll booth?

The fossil record doesn’t tell us: that’s why the lights went out.

Extinction and the modern world

That Neogene toll booth is really the boundary on the geologic time scale between the Miocene and Pliocene epochs.

What happened there are the Miocene-Pliocene (MP) extinctions.

These affected animal life across Eurasia and North America but were especially brutal in Europe, perhaps because tectonic movements shut off the Mediterranean Sea’s main water supply — the Atlantic — and most of that great sea evaporated.

Oh yes it did.

While continental rivers still poured in from Eurasia and Africa, most of the Mediterranean basin was a salty desert for some 300,000 years.

This happened five to six million years ago, and then, as we can see today, things changed and the Atlantic connection reopened.

What a climate disaster!

It’s easy to blame this event for the MP extinctions, but Werdelin and Turner note that those actually had many local quirks in Europe.

It might be too much of an oversimplification to blame all MP extinctions there on a single event (Werdelin and Turner), even such a biggie.

While the MP extinctions aren’t up there with the Big Five, they did hit carnivores especially hard, with 31 of 34 known species disappearing in Europe. (Werdelin and Turner.)

And it wasn’t just cats near the Great Mediterranean Salt Flats.

All families in the order Carnivora, including those in North America and all over Eurasia, were affected.

It makes you wonder if barbourofelids “saw” it coming and got out before the trouble, whatever it was, arrived.

However, it is clear that barbourofelids were gone for a while before the MP extinctions occurred, and sabercats took advantage of this.

So, did the cats push out Barbourofelis before running into trouble themselves?

Maybe, but there is fossil evidence of sabercats and barbourofelids coexisting both in Europe and North America.

This question is still unresolved.

It’s also not clear what took out that comparatively rich assortment of Miocene sabercats, leaving each tribe with only or two representatives.

But that’s what happened, and next week we’ll take a closer look at the oldest of those tribes: the Homotherini.

Martin, L. D. 1980. Paper 287: Functional Morphology and the Evolution of Cats. Transactions of the Nebraska Academy of Sciences and Affiliated Societies. VIII:141-154.

Prothero, D. R. 2006. After the Dinosaurs: The Age of Mammals. Bloomington and Indianapolis: Indiana University Press.

Tseng, Z. J.; Takeuchi, G. T.; and Wang, X. 2010. Discovery of the upper dentition of Barbourofelis whitfordi (Nimravidae, Carnivora) and an evaluation of the genus in California. Journal of Vertebrate Paleontology, 30(1): 244-254.

Turner, A., and M. Antón. 1997. The Big Cats and Their Fossil Relatives: An Illustrated Guide to Their Evolution and Natural History. New York: Columbia University Press.

Van Valkenburgh, B. 1999. Major patterns in the history of carnivorous mammals. Annual Review of Earth and Planetary Science, 27:46393.

Werdelin, L., and Turner, A. 1996. Turnover in the guild of larger carnivores in Eurasia across the Miocene-Pliocene boundary. Acta zoologica cracoviensia, Vol. 39: 585-592.