Update for today on the Popocatepetl page:

February 17, 2019, 4:23 p.m., Pacific: Well, I’ve waited all day, but Popo settled down into a steady venting of light ash and vapors overnight, per the time-lapse videos, and except for one rather ashy-looking puff this morning, has remained at that level ever since.

However, that apparently steady and smooth plume is being caused by some sort of inner turmoil–I have no idea what, but this has been going on all day, per the Chipiquixtle webicorder:

However, there’s no change in deformation in this morning’s CENAPRED graphic. Check out that tremor, though! 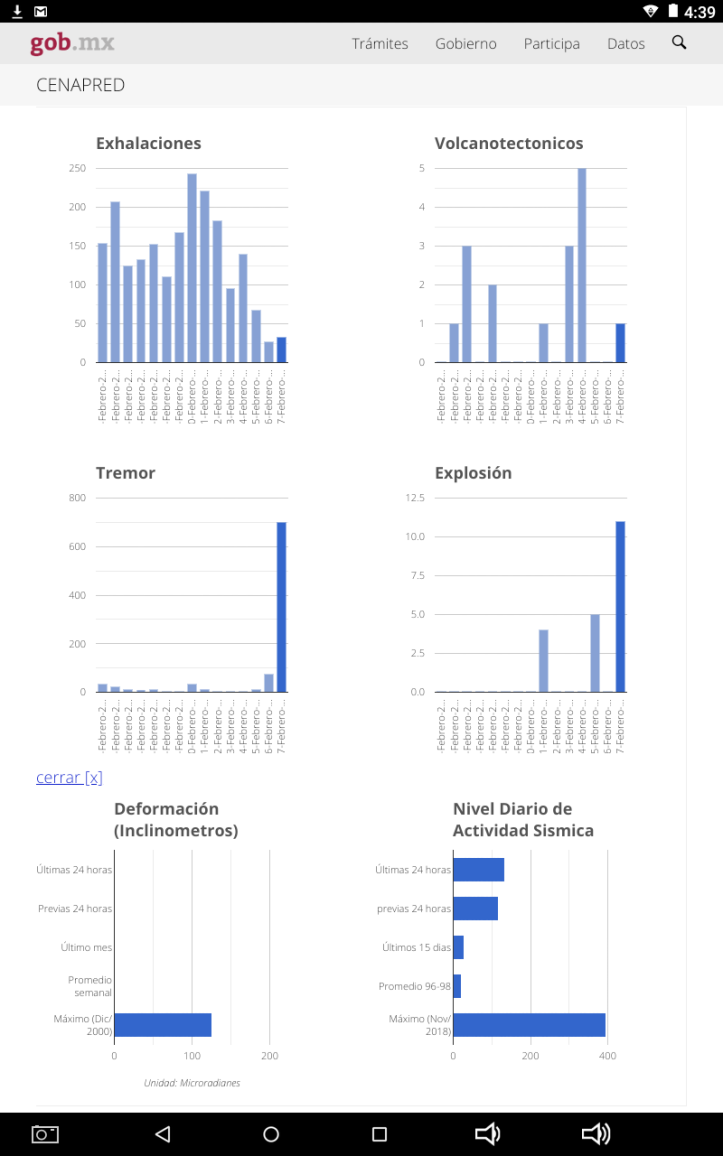 The alert level continues at Yellow Phase 2 — it’s impressive looking, especially with a setting sun behind the ash column, but there isn’t a lot of force behind it. . . yet.

Here’s the view from Mexico City an hour or two earlier:

Day before yesterday, this volcano, which is near Mexico City and several densely populated states and has been slowly ramping up activity since it awoke back in 1994, got a little more active, and that continues. Check out the Popocatepetl page here for much information and relevant links. The monitoring agency CENAPRED issues its updates around 11 a.m. local time; there’s a link on the page to those updates.

Update, 9 a.m., Pacific: Just checked the VAAC advisory page and found this from almost an hour ago (1614 UTC)–last night’s cloud has just cleared the Pacific coast:

RMK: REMNANT VA OBS JUST OFF MEX COAST IS LGT AND
IS FCST TO DISP WITHIN T+12HRS. NEWER VA EMS IS
CLEARLY OBS IN VIS EXTD TO NEAR 80NM W OF SUMMIT
AND IS FCST TO GENLY MOV NNW THRU T+12HRS. FCST
BASED OFF NWP MDL GUIDANCE. …FISHER 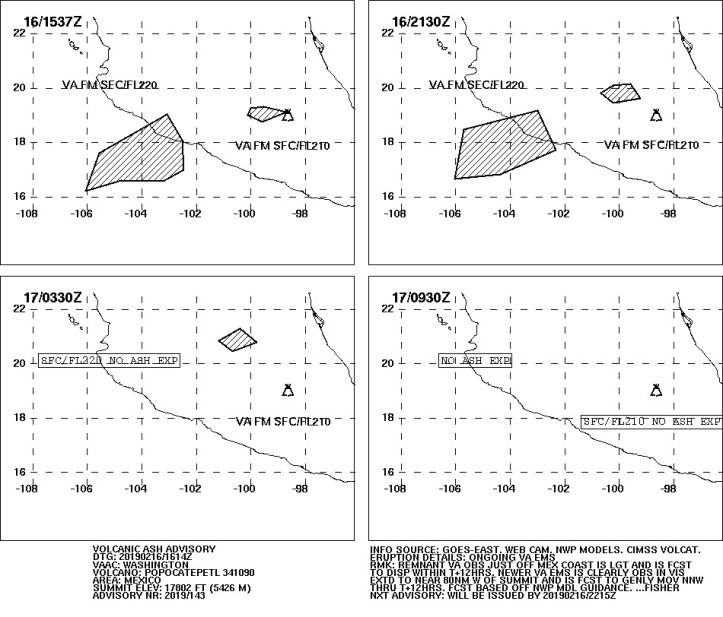 Here are my last two posts, as of the time of writing this one:

February 16, 2019, 7:34 a.m., Pacific: It’s too early for a CENAPRED update today (and they haven’t issued any interim reports on the website linked below, which they do sometimes). However, Don Goyo put on a magnificent but terrifying show under the moonlight last night:

Per CENAPRED this morning:

From 21:00 h yesterday began an episode of strombolian activity that consisted of harmonic tremor accompanied by explosions, which generated the emission of incandescent fragments which reached a distance of approximately 1.5 km on the flanks of the volcano, the height of the eruptive column was 2 km, which was dispersed preferably towards the southwest (vídeo 1) and (vídeo 2). The total duration of the episode was seven hours, after which the seismic activity returned to previous levels. Derived from this activity, at the time of this report has been detected ash fall in the communities of Hueyapan, Tetela del Volcán, Zacualpan, Temoac, Jantetelco, Cuautla, Ocuituco and Yecapixtla, belonging to the state of Morelos, as well as in Tochimilco, Puebla .

Additionally, 67 exhalations were recorded accompanied by steam and gases, in addition to five explosions, four recorded yesterday at 3:28 pm (image 1), 16:02 (image 2), 18:24 and 19:35 h, in all cases the eruptive column was less than 1 km high with low ash content, the last explosion was recorded at 04:09 h today (image 3). In addition, 10 minutes of low amplitude harmonic tremor were recorded. At the time of this report, continues a light emission of gases that are dispersed to the southwest direction (image 4).

CENAPRED emphasizes that people SHOULD NOT go near the volcano, especially near the crater, due to the hazard caused by ballistic fragments (image 5) and in case of heavy rains leave the bottoms of ravines by the danger of landslides and debris flows.

Here are the movies they included:

This is what it looked like on the Chipiquixtle webicorder:

They should rename this volcano Jekyll/Hyde. 🙂