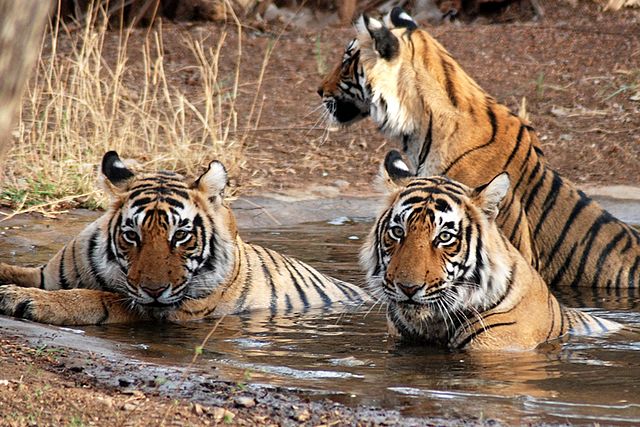 This video is not professionally produced, but it really conveys the size and gravitas of an adult wild tiger:

Yes, it’s sad (and a little disconcerting) to see all the tourists flocking around that noble cat, but let’s take the long view. They are saving its life and those of other Bengal tigers in Ranthambore Park.

Tigers used to be common here, but intensive poaching and logging have almost wiped them out.

When conservationists focus on an area and people pay good money for incredible experiences like that shown above, these big cats come back.

Of note, back in the 1980s, a male tiger named Genghis invented a new way to catch deer here: he waited until they had waded into shallow water and then rushed in, startling and distracting them with all the splashing!

In over 200 years of tiger observations, no one had ever seen that novel hunting style before.

Genghis has since departed for the Great Water Park in the Sky, but some of the other Ranthambore tigers learned his technique. Unfortunately, I couldn’t find a video of that. There’s a nice sketch of it, though, on page 171 of the source listed below.

Tigers are the largest cats in the world, but next Friday we’ll get started on the new eBook material with an introduction to the real King of Beasts.

Sources:
Turner, A., and M. Antón. 1997. The Big Cats and Their Fossil Relatives: An Illustrated Guide to Their Evolution and Natural History. New York: Columbia University Press.