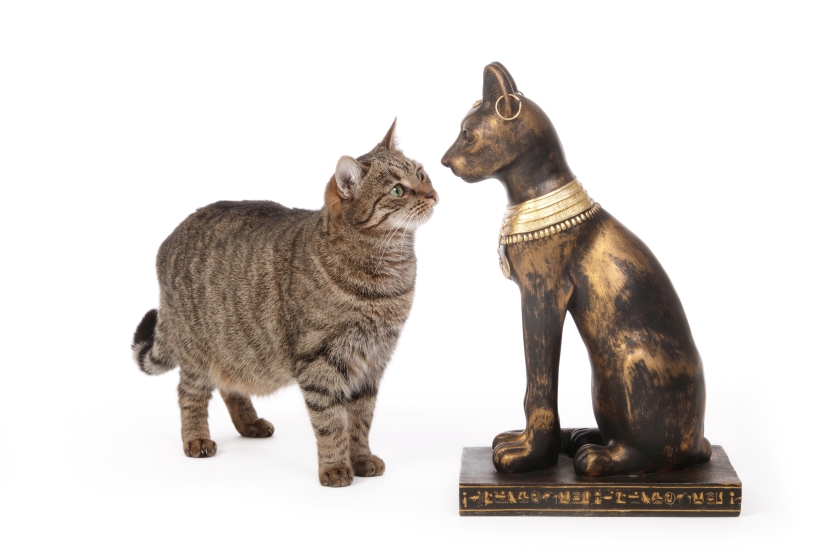 Fancy-cats could be called the only truly domestic cats because they accept total human control of their lives.

That’s the very definition of domestication.

Most other kitties — those that don’t need to earn points by letting strangers handle them in a noisy show ring — set boundaries and enforce them with everything from a dirty look to armed (and fanged) combat.

Intensive selective breeding of show cats has changed their behavior as well as their appearance.

Perhaps something similar happened long ago when cats were first domesticated.

Born to be wild

Wouldn’t you love to be the one doing this.

With the right handling, cheetahs can be tamed. But they don’t pass it along. You’ll have to tame their cubs, too.

All animals are born wild. At least they were until Neolithic human nomads decided to settle down in one place.

Even before this game-changing decision, people had used selective breeding to turn gray wolves into dogs. Now they turned their attention to inventing agriculture and domesticating livestock.

Along the way, these practical geneticists changed other species in many ways.

One result is that domestic animals now are born tame.

Their genome is subtly different from that of their wild relatives, though the exact details aren’t clear.

Perhaps there is a “domestication gene” that hasn’t been recognized yet, or possibly inherited tameness is due to the combined effect of many small genetic changes.

In from the wild

This probably started for the house cat more than 10,000 years ago, soon after people had settled down in a fertile parkland between the Tigris and Euphrates rivers.

Their food and grain stores attracted a host of rodents and other pests. Of all the world’s small cats, only the somewhat sociable African wildcat was in the right place at the right time to take advantage of this development.

Thanks to a little built-in tolerance of the human world, some African wildcats followed the rodents into human settlements.

And apparently people there welcomed them with treats.

Geneticists looking for traces of domestication in the cat genome describe “gene knockout models affecting . . . stimulus-reward learning.” (Montague and others)

In plain English, that means treats — perhaps a tasty morsel of fish or a saucer of milk.

Why would people offer a wildcat treats?

Well, why not? Tame wildcats aren’t a threat to human beings; they’re cute; and they keep pests away from the food.

There were other positives for the wildcat besides treats.

She-cats always try to locate their den near a reliable food source. Neolithic settlements and farms were happy hunting grounds. They also had lots of nooks and crannies in which to raise a family.

People probably found and tamed some kittens, as well as adult cats. Treats would have been useful for this.

The wildcats immediately began training us through the power of cuteness. Remember, no one had ever seen this before in their own home environment.

Unfortunately, we have no way of knowing if those kittens, over time, became tame from birth. The Neolithic Revolution is not known for its many written records.

What’s needed is documentation of cats living with people. Something like paintings and statues . . .

Very little archaeological evidence of domestic cats exists until roughly 7500 BC, when someone on the Mediterranean island of Cyprus died and was buried. Close to this human grave, an eight-month-old cat was interred at the same time, with similar ritual. (Vigne et al., 2012)

Some experts say this is the earliest known example of feline domestication.

Others argue that it could have been a tame cat.

At that point, there was no Egypt — just small farms and villages in the Nile River valley like those that were springing up along the Mediterranean coastal region that would soon become Canaan/Phoenicia.

There are some intriguing hints that humans and cats were keeping up their association.

Per my informal Cat Chronology, for instance:

By around 950 BC, Egyptian culture had evolved to the point where there was a connection between domestic cats, fertility, and the (formerly lion-headed) goddess Bastet.

Pilgrimages to Bastet’s temple, particularly the big one in Bubastis, were very important. While definitely religious, these high-profile visits to honor a fertility goddess also had a party atmosphere, according to contemporary Greek historians.

Not surprisingly, they attracted many people.

At the temple, the multitudes all wanted to offer a cat mummy to Bastet.

To meet this demand, temple operators established history’s first recognizable catteries, breeding mostly domestic cats (though genetic testing of mummies shows a few other species in there, too).

Many were sacrificed at age two, mummified, and then sold to pilgrims. The good news: some escaped this fate, since genetic testing also shows that these temple cats are the ancestors of Egypt’s modern street cats.

For the first time, as far as we know, humans had strict control over feline food and reproduction, selecting cats that were friendly enough to handle and could tolerate group living indoors.

Literally millions of cats went through the temple catteries as the centuries passed.

That is certainly intensive breeding!

While Bastet can’t claim all of the credit for finalizing cat domestication, this must have had quite an effect on cats that, up until now, had probably been on the fringes of human civilization, slouching their way towards domestication.

Cats were very important to Ancient Egyptians. We find it shocking that they were sacrificed by the millions, but it was done in faith. Anyone else who killed a cat, even accidentally, faced the death penalty (if they escaped mob justice).

Pharaohs forbade exporting cats, and government officials were sent to retrieve ones that had been smuggled out of the country.

So, how did cats exit Egypt and take over the world? We’ll look at that next week.

Bradshaw, J. 2013. Cat Sense: How the New Feline Science Can Make You A Better Friend to Your Pet. New York: Basic Books. Retrieved from https://play.google.com/store/books/details?id=iU8PAAAAQBAJ

Serpell, J. A. 2014. Domestication and history of the cat, in The Domestic Cat: The Biology of its Behaviour, eds. Turner, D. C., and Bateson, P., 83-100. New York: Cambridge University Press. Retrieved from https://play.google.com/store/books/details?id=m-NRAgAAQBAJ