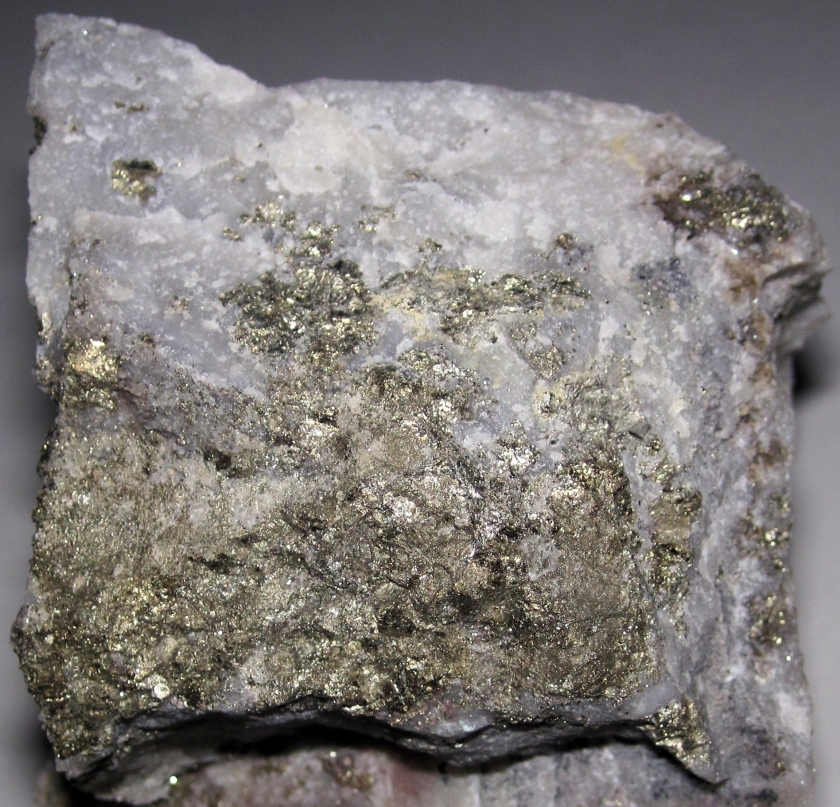 I once found a mother lode of gold, or thought I had.

We lived in the Berkshire Hills of western Massachusetts, and one summer weekend while out in the backyard doing kid things, something shiny on a dark gray rock caught my eye. It was a small, glittering gold square of metal.

Elated, I dug that out of the rock and went racing indoors to inform my parents of our new-found wealth. They broke the news to me as gently as possible that there is such a thing as fool’s gold in the world.

Those of us who have learned not to be foolish call this mineral by it’s true name: pyrite.

Gold is a single element and a metal, but pyrite is a combination of two elements – the metal iron and the nonmetal sulfur.

A good way to tell whether you’ve got real or fool’s gold is to hit it with a steel hammer. Gold will flatten, but pyrite just sparks.

There’s metal in both. Why do they act so differently? Because gold’s crystal structure looks like this:

The arrangement of iron and sulfur in pyrite’s crystal structure makes “fool’s gold” a lot of tougher, and a look at its lattice also shows why pyrite crystals are cubic:

What Can You Do With It?

Ancient civilizations may not have known about crystal structures, but these highly practical people soon found many uses for pyrite.

Of course it made nice jewelry, but in the days of Alexander, iron itself was considered a precious metal because of its use in lapidary work. Only diamonds can cut diamonds, but first you need rotating plates of iron to securely hold the diamond abrasive in place as you work.

In the 3rd century, the Chinese learned that sulfur could be extracted from pyrite. They used it in medicine and by the 9th century were making gunpowder.

Ironically, by the 16th and 17th centuries wheellock firearms were using pyrite as a source of ignition.

Pyrite has had more peaceful uses, too. Starting in classical times, people made copperas with it. This colorant was used for many things, including the iron gall ink with which so many historical and cultures were written from the Middle Ages to the 18th century.

Is It As Valuable As Gold?

There’s an old story, unverified as far as I know, that Captain John Smith once sent a ship loaded with “gold” to London, where it was recognized as iron pyrite.

That makes me feel a lot better about my backyard “treasure” find as a child.

You won’t find pyrite on the USGS list of important minerals but it nonetheless has many practical uses today, and the crystals can sometimes possess a museum-quality beauty.

More generally, I think, pyrite collecting is a good way to get started as a mineral collector.

There are large deposits of pyrite in Spain, but you can find it just about anywhere. My little nugget of pyrite came from the metamorphosed sedimentary and igneous rocks – schist – of the Berkshires in Massachusetts, but pyrite forms in any rock type, especially in Tennessee, California and Virginia in the United States, as well as in Canada, Peru, Asia and Russia.

This post was first pubished on Flight to Wonder in 2013.

Iceland and other categories!

My Volcano and Cat Books

Each link takes you to a page where you can choose your own store — Apple, Kindle (Amazon), Kobo, Google Play, etc. — to buy my eBook. You don’t have to select a preferred site, unless you want to: just leave that box empty and continue. Thank you, and enjoy!

Get your copy today at Amazon, Google, and other fine stores online!

Africa’s OTHER cats! Available at these fine stores!

Available at these fine online stores!

I am a layperson, retired from medical transcription after twenty-five years and enjoying a new chance to explore earth science thanks to the Internet and (finally) some free time. I have been blogging for years and hope to make this science writing gig full-time in 2021. This recent writing update sums up my writing biography up to now.

Want me to write something for you? Drop me a line at bjdeming at Gmail!