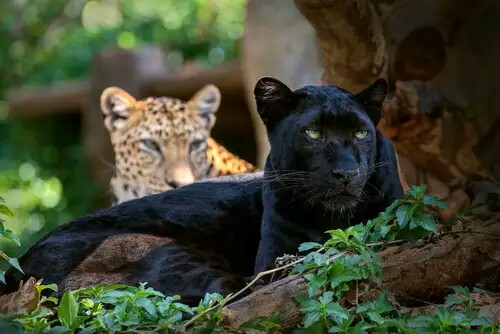 Hyenas aren’t cats, but they do belong to the feliform (cat-like) half of the Order Carnivora.

If you own a house cat, then you probably nodded your head and smiled, like me, as he talked about “what he can get from you” and “one-sided.”

To some extent, all cats are alike.

But Fluffy is domesticated and can return our affection and coexist with us.

Leopards can be tamed, as this pair has been, but they are extremely dangerous even then.

It’s amazing to see these cats — the original “black panther” — in Africa, because melanistic leopards are considered to be “virtually nonexistent” there. (Kitchener et al.)

They’re much more common in the humid tropical forests of southern and Southeast Asia.

In fact, Malaysia is famous among wildlife biologists for its black leopards on the peninsula south of the Isthmus of Kra. They almost completely outnumber spotted ones there!

And no one knows why.

Here’s a melanistic leopard seen during the day in an Indian national park.

That’s how you do stalk-and-ambush hunting in the tree tops, but the monkeys aren’t buying it. They flee, but if the cat remains still, perhaps one or two foolish ones will return.

Remember what the presenter in that first video said: they only let you see them when they want to. In this case, the black leopard probably feels safe enough up there to just ignore the intruders.

But one thing the presenter said wasn’t correct, if you want to take a scientific view of what turns cats black.

Technically, there’s no “melanism gene.” It’s the result of mutations in the genes that control pigments on a cat’s fur.

Down through the years, melanism has arisen independently several times in the cat family.

Occasionally, as in jaguars — the leopard’s New-World doppelganger — it’s a mutation in the melanin-related gene (MC1R) that affects how much black pigment goes into the fur.

But in leopards (and also in the domestic cat), a mutation happens in the agouti-signalling protein (ASIP) that controls the animal’s color. I don’t think it’s the same mutation in leopards and house cats. Rather, two different ones happened in two different species, in very different geographic locations.

It’s not surprising that separate mutations happened in ASIP — agouti is something that virtually all mammals share.

Ladies and gentleman, let’s hear it for ASIP! (Note: Here’s how they filmed this and other slow-motion views of cats.)

The really cool part is that your house cat still has its tabby markings under that black coloring, just as melanistic leopards still have their rosettes.

As I understand it — genetics is very complicated — these nifty coat camouflage patterns are unaffected by the ASIP mutations because they’re controlled by other genes.

Let’s close with a video that’s remarkable for two reasons:

Next week, we’ll take an in-depth look at all leopards before moving on to the New World and its fascinating array of cats big and small.