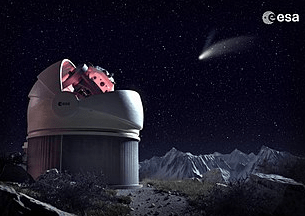 Late this week, I watched a small asteroid zoom past Earth about 70,000 miles away.

An astronomer in Rome, Italy, working with the Virtual Telescope Project and Arizona’s Tenagra Observatories live-streamed the close encounter.

Because it was so close to our planet, this space rock really zipped across the telescope field, compared to the background stars, but the astronomer was still able to track it – and on a full-moon night, too, when there is a lot of skyglow. That’s amazing!

I thought it was adorable. Had it been on a collision course with Earth instead of just flirting with the planet from 70,000 miles away, it would not have seemed so cute.

This Chelyabinsk meteor was only about the size of a city bus, but it was moving so fast that it had enough kinetic energy to mimic a blast some 30 times more powerful than the Hiroshima atomic bomb. ( W )

It approached with the Sun behind it, so astronomers had no idea this near-Earth object existed until it arrived over the Ural Mountain region.

2018 DV1, on the other hand, was detected on Monday, February 26th, and reached its point of closest approach on March 1 (Pacific time).

There was just a few days’ warning. What would we have done if it had been on a collision course?

A better way to phrase that question is, what will we do when (not if) an asteroid detected, say, on a Monday is due to collide with Earth on Friday?

I know what you’re thinking of right now: the dinosaur-killing asteroid that shut down the Cretaceous period.

Well, unlike the Chelyabinsk meteor, such an impactor would be a global game-changer, not the much more common near-Earth object that astronomers have seen and tracked recently.

However, since I looked up the K/T event at my other blog for an over-long and over-detailed post on cat evolution, let’s check that impact out briefly.

Since that post was about cats, my focus was on the most likely mammalian ancestor of carnivorans–Cimolestes, the “Bug Thief.”

One of the unclassified little furballs cowering in the bushes [as T-Rex or even a veggie dinosaur lumbered by] was Cimolestes. It had very sharp cheek teeth that it probably used to devour insects. (Rose)

Perhaps that’s why scientists have given it a name that means “Bug Thief.”

Along with other mammals, as well as tyrannosaurs, Triceratops, and other dinosaurs, the Bug Thief lived in a closed-canopy rainforest on swampy lowlands. The area was near a great inland sea that covered central North America in those days, and it would eventually become the US state Montana. (Prothero, 2006; Rose; Sewall and others; Stoffer; Sweet)

This shallow sea was connected to the Gulf of Mexico (Stoffer and others) where, almost 2,000 miles (3,000 kilometers) south of Cimolestes, the Yucatan platform sat – a big, inviting space target. (From Sweet, Figure 2)

The Bug Thief’s tropical home was rich in “low-energy sedimentary environments” (Sweet), but one day something shook it up badly.

Hundreds of square miles of semisolid mud on the sea floor chaotically mixed together or curled up into rolls and curvy folds. The direction of this movement was always to the south. (Stoffer and others)

Today the deformed seabed is frozen in place as a layer in rock outcrops. Geologists say that the movement here was toward the right (south).

Sediment structures like sand boils and other features that only appear during earthquakes also formed. (Stoffer and others)

And after that there are no more Cretaceous bone fragments or mollusk fossils, despite an intensive five-year field search for some. (Stoffer and others)

Researchers suspect that the cause of all those changes was the bolide impact that excavated the Chicxulub crater around 65 Ma. (Stoffer and others)

A 6- to 9-mile-wide (10-14 kilometers) (Kring) space rock hit Earth there, on the Yucatan peninsula, causing magnitude 11 earthquakes and collapsing the Yucatan platform. (Schulte and others)

Yes, that kind of shaking could have rolled up the seabed near the Bug Thief thousands of miles away, though it’s not certain that impact-generated tsunamis could have traveled so far north. (Stoffer and others)

The details of what happened on Earth after this impact are controversial. (Oppenheimer)

The only unquestioned evidence has already been mentioned: Something big hit Earth around K/T boundary time.

Beyond that basic fact, every discussion about impacts and the K/T extinction, as far as I can tell, is hypothetical only.

And this means there are some wild but still plausible ideas about the K/T extinction.

Because of my forestry background, I like the following description, based on plant evidence, of how the impact affected western North America where Cimolestes lived.

Understory plants, released by the death of the former canopy forest, now thrived.

First, pioneer plants came in. Then slowly, over hundreds to thousands of years, the green world restored itself.

Eventually the same dense rainforest once again shaded the swamps. Only a few exotic flowering plants had vanished from it.

But some other living beings were missing, too.

During this extended catastrophe, dominant life forms, including but not limited to Earth’s land and marine nonavian dinosaurs, disappeared.

So did most mammals, including enough marsupials to give the surviving placental mammals dominance in North America. (Prothero, 2006; Rose)

Even with that edge, it wasn’t easy for them. Terrestrial ecosystems collapsed as completely as they had in the Permian extinction, although the global environment fared better this time around. (McGhee and others)

But Cimolestes and some other mammals somehow made it through and started the new age. (Rose)

Yeah. If something that big ever hits Earth again, let’s just hope it comes from the direction of the Sun, like the Chelyabinsk meteor did, so we won’t know about it until it’s here.

Fortunately, recent Earth-approaching asteroids have been much smaller. Too, scientists boosted up their game once they realized, back in the 1980s, that gradualism is only one part of geological history.

According to NASA’s online Center for NEO Studies, another asteroid – 2018 DC – is passing by today.

2018 DC is an “Apollo object,” per its Small-Body Database entry. Such objects are the most common near-Earth object group. (Wikipedia)

If I’m reading the approach information correctly, 2018 DC will get within 22.3 million miles (36 million kilometers) of Earth today – much farther away than the one I watched on the livestream – before heading back out on its orbital path. This looks like the closest approach it has made since the first data entry, from 1926, but after 2018 it stays farther away from us when swinging through the neighborhood.

Another Apollo object, 2018 DS1, is also visiting today, according to the Minor Planet Center, though I can’t make heads or tails out of its data page. It was first observed on February 23, 2018.

There are many thousands of known NEOs out there, with an average of 30 more added each week, per NASA. There are also probably tens of thousands of unrecognized asteroids and comets, not to mention an occasional Tesla Roadster.

NASA, the United Nations, and a variety of national, international, and private groups are on the lookout for NEOs.

Here is a video that NASA made recently for International Asteroid Day:

Aside from either a K/T-level impactor or the involvement of Hollywood, the planet’s best minds are working out a number of possible defensive measures, summarized in this Wikipedia article.

NASA also keeps a list of potential impact risks. This is science in action, which means that it is all very tentative. This automated program has little information to go on, and people have to step in and determine exactly how much risk there is.

Fortunately, most NEOs that show up here are eventually taken off the list. And, from what I’ve read, there appears to be very little risk of an impact from any known object.

The ones that haven’t been seen yet, or can’t be seen (like the Chelyabinsk meteor), well…

A hundred years ago, no one had a clue that disaster can strike so abruptly.

Now, after learning of the K/T asteroid, we laypeople have swung to the other extreme and worry about catastrophe happening at any moment.

That’s possible, of course, but not very likely. Today we have the best knowledge and finest equipment humanity has ever had to meet the challenge, if it arises.

Not only that, we can sit at home and watch a live-stream as adorable little near-misses occasionally pass us on their otherwise lonely journey around the huge and mostly empty Solar System.

Kring, D. A. 2007. The Chicxulub event and its environmental consequences at the Cretaceous-Tertiary boundary. Palaeogeography, Palaeoclimatology, Palaeoecology. 255:4-21.

Prothero, D. R. 2006. After the Dinosaurs: The Age of Mammals. Bloomington and Indianapolis : Indiana University Press.

Rose, K. D. 2006. The Beginning of the Age of Mammals. Baltimore: The Johns Hopkins University Press.

Sweet, A. R. 2001. Plants, a yardstick for measuring the environmental consequences of the Cretaceous-Tertiary boundary event. Geoscience Canada. 28(3):127-138.

Iceland and other categories!

My Volcano and Cat Books

Each link takes you to a page where you can choose your own store — Apple, Kindle (Amazon), Kobo, Google Play, etc. — to buy my eBook. You don’t have to select a preferred site, unless you want to: just leave that box empty and continue. Thank you, and enjoy!

Get your copy today at Amazon, Google, and other fine stores online!

Africa’s OTHER cats! Available at these fine stores!

Available at these fine online stores!

I am a layperson, retired from medical transcription after twenty-five years and enjoying a new chance to explore earth science thanks to the Internet and (finally) some free time. I have been blogging for years and hope to make this science writing gig full-time in 2021. This recent writing update sums up my writing biography up to now.

Want me to write something for you? Drop me a line at bjdeming at Gmail!