Repost: Klyuchevskoy (and a coda)

Here, with some editing, is the last of my “stone-torch” reposts from 2020 on Kamchatka volcanoes. There are many, many more fire mountains there than these six (also counting those we’ve covered earlier:
Avachinsky, Koryaksky, Bezymianny, Kamen and Tolbachik), but Klyuchevskoy, the tallest active volcano in Eurasia, is Kamchatka’s “Big Heat” — all 270 km3 of it. (Ponomareva et al., 2007)

Kamchatka’s First People worship this volcano as the place where Earth was made.

In a sense, they’re right.

Klyuchevskoy probably does tap into a global layer of primal material.

That mantle is the ultimate source of all material in Earth’s rocky crust, from basalt seafloor to granitic continents to the frozen hot-spot lavas that underlie cities like Honolulu and Reykjavik.

Of course the geological situation down there must be more complicated than a simple pipe-like opening from mantle to vent, or else there would be a blowout and Earth’s surface would look very different (also, we’d probably all be dead).

But no one yet knows for sure what exactly is going on underneath Klyuchevskoy and its associated volcanoes Kamen, Bezymianny, and Tolbachik. 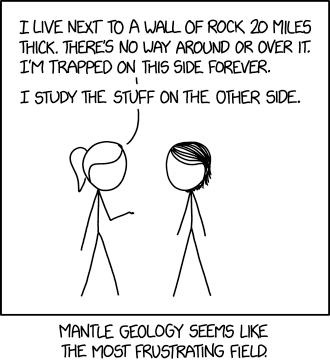 Of note, Kayzar et al. do describe Klyuchevskoy’s lava chemistry as “primitive” — that is, very much like the mantle material that we know is erupting at underwater spreading ridges that manufacture seafloor basalt in all of the world’s oceans.

Not shown: A mid-ocean spreading center. Klyuchevskoy is the active volcano on the left. For local residents, light to moderate ashfall is the main predictable volcanic hazard, but Klyuchevskoy’s lava flows have gotten to within three miles of this town (Kliuchi) in the recent past.

Why would something akin to seafloor basalt be rising up from the mantle and erupting from Kluchevskoy, which sits on the Kamchatka Peninsula’s continental crust?

I give a major hypothesis, attempting to explain the situation down there, in a Holmesian way at the end of this post.

But first, here is some basic information about this active Kamchatkan giant.

And overhead, local air traffic as well as the major international air routes between Asia and North America.

Aviation Code Green in late 2021, per the GVP; I can’t find any more recent updates.