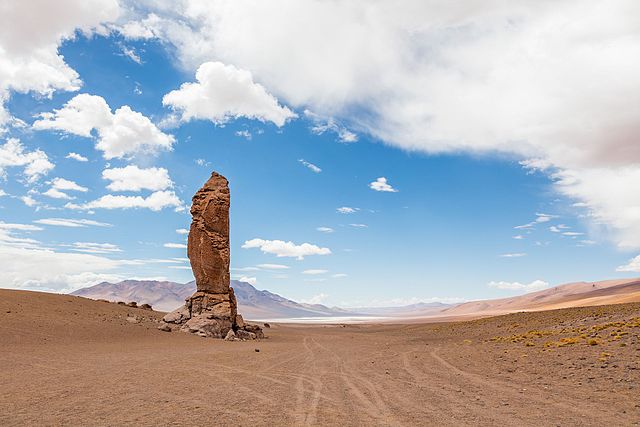 Want to experience a supereruption?

The BBC has you covered.

But in the real world, believe it or not, people can walk around in a supervolcano and never know it.

For example, here is a hauntingly beautiful video posted by someone who visited Láscar, the northern Andes’ most active volcano, but missed nearby La Pacana — one of the world’s biggest calderas and site of the world’s fifth largest known supereruption, per Mason et al. (see source list).

To do these adventurous travelers justice, not even the pros could see La Pacana until the 1980s, after satellite imagery had become available.

Yes, space scientists do use this part of the world for research. And those young, healthy adults are trudging along because there isn’t much oxygen in the air at 15,000 (trailhead/plain) and 18,000 feet (Láscar’s summit)!

Láscar’s steaming, sulfurous crater is enormous, but this is still a “normal” volcano. So are the nearby mountains.

Where’s the supervolcano? Well, as I say, they mostly missed it.

But there are some hints.

La Pacana’s western caldera rim is just east of Láscar. Going by shadows (and assuming that they spent the morning climbing and reached the top shortly after noon), I think at least some of the flat land shown, particularly towards the end of the video, might be part of this 37 x 22-mile-wide caldera.

For comparison, by the way, Yellowstone’s caldera is 35 x 50 miles wide, while Toba’s is 18 x 60 miles. We are truly walking with giants here.

A map to identify the sights in that video would be nice, but this is the Andes. Multiple supereruptions have happened here — and not just from La Pacana! — as well as lots of “normal” volcanism that gorgeously clutters up the landscape.

All of that makes for a very busy geologic map:

You could remove the text and have a good Halloween mask with that.

Still, we laypeople can find a surprising amount of information in those colors and lines. For instance:

As well, except for the blue salt pans, most of the colorful smaller blobs on this geological map were produced by “normal” volcanism that started after the Atana Ignimbrite blast (the landscape before that supereruption, of course, is buried).

This activity still goes on today, especially at Láscar, but there doesn’t seem to be much heat left in La Pacana.

What few geothermal springs remain are generally at around 80 degrees Fahrenheit. The boiler here has cooled off quite a bit.

During a recent science blog Q&A, an expert on La Pacana and other regional supervolcanoes explained why “normal” volcanism dominates the region today (I added some images and a link):

The Central Andean plateau is one of the most mindblowing landscapes on the planet. You feel like you are on another planet (we use it as analog for Mars) and everywhere you look are volcanoes and volcanic deposits! Millions of years of volcanic history are beautifully preserved waiting to be admired and deciphered. It is a high altitude desert and logistically quite challenging. It is relatively poorly studied, so it is something of an open book, few other groups work there, which has allowed us to really pick and choose some great projects out there. Every place you go to triggers enough questions to fill a lifetime of work for a volcanologist. It is rare to have such a wonderful natural laboratory available.

Between 10 and 1 Ma the region was characterized by many large caldera for “supervolcanic” eruptions and since then activity had settled down to steady state composite cone building activity along the chain of volcanoes that forms the crest of the Central Andes. This change signals the rate at which heat was being introduced into the crust changed about a million years ago.

What controls the heat influx into the crust? This is very complex, but I will give you the essence without delving too deeply into details – just the facts. Remember that the Andes and it’s magmatism is part of the Ring of Fire produced by convergence of plates. At convergent margins there is a downgoing (subducting) plate and an overriding plate – in this case the downgoing Pacific or Nazca plate and the continent of South America. Heat is advected into the South American plate crust from the mantle in the form of magma primarily and the rate of magma (and therefore heat) being produced is controlled by the rate at which the mantle can melt. The rate at which the mantle melts is related to a variety of factors . . .

These factors are controlled by the geometry of the plates – the angular relationship between the downgoing (subducting) plate and the overriding continental plate. We believe between 10 and 1 Ma years ago the angle of the downgoing plate changed from shallow to steep and this resulted in a rapid increase in the rate at which the mantle was melted and heat was introduced into the crust – think of it as mantle moving upwards into the area opening up between the downgoing and the crust. As it moves upwards the mantle melts and so more heat is being introduced into the crust. Once the downgoing plate settled into its current configuration (steep) about 1 Ma, the flow of mantle ceased and no extra melting occured and a normal heat flux returned – the volcanism settled down to the steady state “dribble” or “sputter” seen today.

Only a volcanologist could call something like this magnificent and terrible VEI 4 eruption a “dribble”:

Here’s more information about this very active south Chilean volcano. Of note, the experts keep looking for but, as far as I know, have not yet found evidence of a Plinian column like this before a supereruption — it’s possible that those . . . just . . . happen.

But such perspective must come to those who can walk through a supervolcano and really see it, unravelling the debris of geologic time and patiently documenting each moment of a real-life VEI 8+ supereruption while standing at what was, 4 million years ago, Ground Zero.

There is practical value in this difficult work, as well as scientific interest.

To protect ourselves and as much of civilization and our infrastructure as possible, we need to learn everything we can about supereruptions before the inevitable next one comes along, most probably in the remote future.

In the meantime, there’s always the movies to help us indulge in both the fascination and the terror the mere thought of these powerful events brings to us:

Featured image: “The Monk of La Pacana,” wind-carved ignimbrite in the caldera; image by Diego Delso via Wikimedia, CC BY-SA 4.0.

Gardeweg, M., and Ramírez, C. F. 1987. La Pacana caldera and the Atana ignimbrite—a major ash-flow and resurgent caldera complex in the Andes of northern Chile. (Abstract only) Bulletin of Volcanology, 49(3): 547-566.