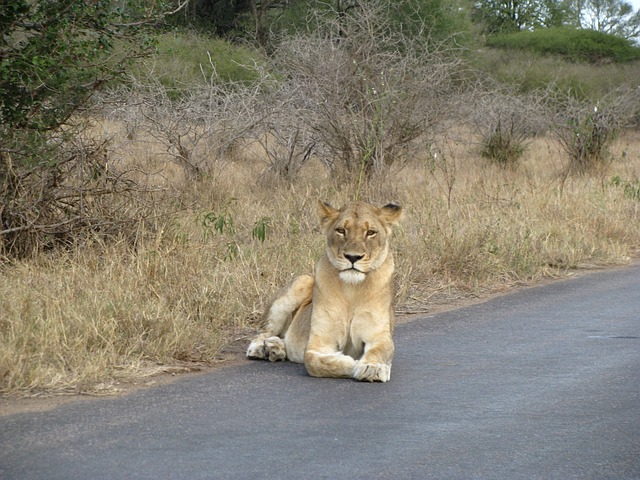 Fact: Lions may once have had the widest range of any cat.

Lynxes are the only modern wild cats that live in both the Old World and the New. (Wright and Walters) But Ice-Age lions might have ranged over all the northern continents as well as Africa.

It depends on which expert source you check.

The authoritative IUCN, which publishes the Red List of Threatened Species, says that lions used to live in Europe, Africa, southwestern Asia and India.

Now the lion lands have shrunk to parts of sub-Saharan Africa, mainly in the east and south, with a separate group in one Indian state. (AZA; Bauer and others)

No one disputes this history of lions, but some widely respected experts add that Leo also got into the Americas.

This would give it the biggest range of any known modern cat. (AZA)

Lions, say these experts, migrated from Asia over the Bering land bridge some 300,000 years ago.  Back then, the bridge was open because sea level was lower than it is today. (O’Brien and Johnson; Werdelin and others)

These scientists are counting two American fossil cats as lions – Panthera atrox, which often died at La Brea’s “tar” pits just like Smilodon, and P. spelea, a/k/a the cave lion. (Werdelin and others)

Supporters of the Old-World version say Atrox was more like a jaguar. Genetics is complicated, but molecular evidence may show that both Atrox and the cave lion were genetically separate from modern lions.

Good arguments for and against prehistoric lions in the New World are being made right now. (For more details, see discussions in Barnett and others; Davis and others; King; Switek; Werdelin and others)

It’s not yet a burning controversy, but the argument will go on for a while.  There just isn’t enough fossil evidence available to say for sure which viewpoint is closest to the truth. (Werdelin and others)

A solution is needed.  All lions today are on the Red List, some of them (in western Africa) critically endangered.  The more information conservationists have about the lion’s past, the better they can help these amazing and beautiful cats have a viable future.