He made a shield and morion
of coral and of ivory…

Nowadays, we treasure living coral for its beauty and environmental role. We prefer to see ivory where it belongs – as part of living animals, particularly elephants. Artisans still work with precious coral, but ivory usage and trade are restricted in many countries.

This set of coral jewelry, for example, was made for Egypt’s Queen Farida in 1934: 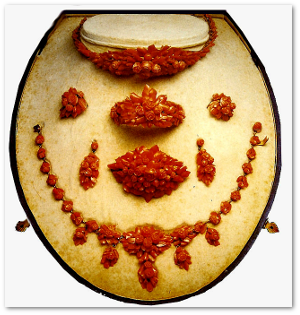 As for ivory, Tolkien was probably familiar many intricate carvings such as this 11th Anglo-Saxon reliquary made from walrus ivory:


So what did Tolkien have in mind for the hero of Errantry?

A morion is a helmet like those worn by the conquistadors in the New World. They also used rough shields, but I think our poet would have been more influenced by Cellini than Pizarro.

Benvenuto Cellini did excellent work on a ceremonial chased and silver-plated iron morion and shield for the Medici family of Florence.

Ivory could be carved in such a way.

Coral is way too soft to serve as a shield or helmet, but it would look well in place of the golden-colored metal here as adornment.

Another way to image it is as a solid ivory shield with coral decorations, somewhat along the lines of the ivory and gold shield that was found in the 4th century BC tomb of Philip of Macedon.

So here we have it. Our hero, wearing coral and ivory headgear and bearing an ornate shield, is striding along the road, his habergeon a’glitter with quartz crystals. Yes, you heard him coming long before you saw him.

He is wearing his emerald sword in a chalcedony sheath and brandishing javelins of malachite stalactite.

Sure no character born of Tolkien’s imagination – not even Thorin Oakenshield in the last battle – looked grander.

As J. R. R. Tolkien’s stories developed, of course, the Merry Messenger of Errantry evolved into Earendil the Mariner, on whose brow was bound a Silmaril.

Now, there is no real-world equivalent for a Silmaril (an alternate mythology for the planet Venus) or an Arkenstone. These stones all glowed in the absence of any light source.

Too, Arda’s Silmarils were said to be handcrafted artifacts rather than natural. I have no idea what the Arkenstone of The Hobbit was.

However, I did stumble across an interesting coincidence between ivory and The Lord of the Rings. It would take too much time to describe it, so for you Tolkien fans I will just say that this is really and truly an olifant: