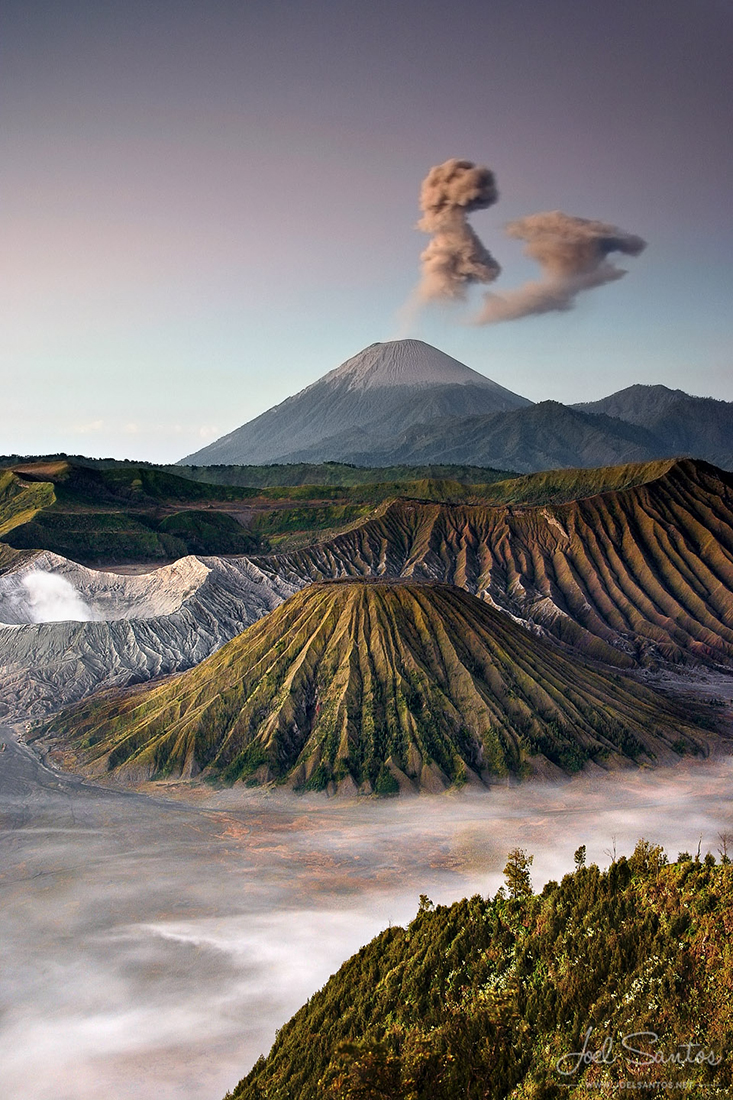 You have to see it to believe there can be such a place as this in the real world.

And many people call this home!

What are we looking at here?

For starters, we’re in East Java Province, on the island of Java, in Indonesia.

The smoking volcano in the distance is Mount Semeru. It’s one of the world’s few constantly active stratovolcanoes, erupting several times a day. (Photovolcanica)

Close up, what looks like a steaming hole in the ground in that video is Mount Bromo. Its walls actually rise more than 400 feet above the surrounding sea of sand-like volcanic materials.

By the way, that’s actually the name of the brownish flat area you can see around Bromo and its companions: the Sand-Sea Caldera (people usually skip the hyphen, but I use it because “Sandsea” sounds like an English coastal resort).

The hills around Bromo are all volcanoes, too, but they’re either inactive (like Batok, the sugar-loaf flat-topped cone with deeply eroded sides) or extinct. (Santoso et al)

Here’s a 19th-century bird’s-eye view to help you sort them out (notice, too, that these volcanoes and the surrounding Sand-Sea Caldera sit inside an even larger caldera that has steep sides)

These stratovolcanoes sit in the Tengger caldera, whose steeply eroded walls look very dramatic in the above video.

The people shown are tourists standing on the northern caldera rim to watch the sunrise and, hopefully, get some shots of the dramatic Tengger volcanic complex before the daily fog rolls in at around 9 a.m.

As you saw, the caldera-rim hills and valleys are inhabited. Tenggerese Hindus live here in about 30 villages.

You have seen their temple at the foot of Mount Bromo. It is active, just like the volcano that it was built to honor.

Per Bachri et al., the Tenggerese cultural identity centers on Bromo as a spiritual being.

As seen in the video, people worship it at the temple and also at the crater rim.

Once a year, they throw produce, farm animals, and even money into Bromo’s vent.

But wait: it’s also acceptable for poor people to go down below the offering spot to catch the stuff.

They stand where that one man in the video was walking on the very edge of the steaming chasm.

Have you ever been so hungry, you would do something like that?

Nonbelievers may also use the staircase up to the rim, but from the Tenggerese point of view, they don’t have an “in” with Bromo.

Locals therefore were not surprised when an unexpected blast in June 2004 killed two tourists here and injured several others.

It may seem heartless, but the Tenggerese do walk their talk. In Bachri et al., there is a dramatic image of ceremonies at the temple in 2010 while Bromo was having a VEI 3 eruption right behind and above them!

Getting back to the local geography, you might have noticed on the bird’s-eye drawing that Tengger Caldera abuts an irregularly shaped, heavily eroded area to the northeast that also has steep walls.

Of course that’s a caldera, too. This is VolcanoLand here!

It’s called Ngadisari Caldera and is hundreds of millennia younger than Tengger.

If younger, why is it so weathered? Because this region gets a lot of rain, which drains out of Ngadisari through the Sapikerep Valley.

Of course, there is no umbrella over the Tengger complex, and it gets the same amount of rainfall.

But here, the runoff just flows out across the Sand Sea — Indonesia’s only desert-like environment — and disappears!

No one really knows why, though it must have something to do with all that porous volcanic “sand.” (Zaenuddin)

Zaenuddin notes that, wherever it goes, the water does interact with magma somewhere down there, because Bromo’s eruptions are all steam driven (phreatomagmatic). Some of the other eruptions here in the past have also been phreatomagmatic.

A word about origins

Bottom line: Volcanoes erupt here, and throughout the Sunda Arc, because the Indo-Australian tectonic plate is subducting underneath Eurasia.

And that’s all there is about volcanism on Java that is simple. See Smyth et al., if you’re curious about details.

Per Zaenuddin, there are two hypotheses about how the Tengger complex formed.

The Sand-Sea Caldera eruptions happened in a series during the late Pleistocene, starting around 33,000 years ago, and went on for a little while after the last ice age ended.

Bromo & Company, out there in the Sand Sea, are much younger than that.

They built themselves up over the past several thousand years, with Bromo still under construction today.

There simply isn’t enough room for Semeru today, though that is the most hazardous volcano of this group.

For that reason and also because Semeru is quite different from the Tengger volcanoes, it can wait until next week.

Suffice to say that it’s south of Tengger but connected to the complex by a massif — basically, a 350-square-mile collection of assorted old calderas, lava domes, cones, and explosion craters. (Solikhin et al.)

Bromo’s status at the time of writing is Normal/Aviation Code Green.