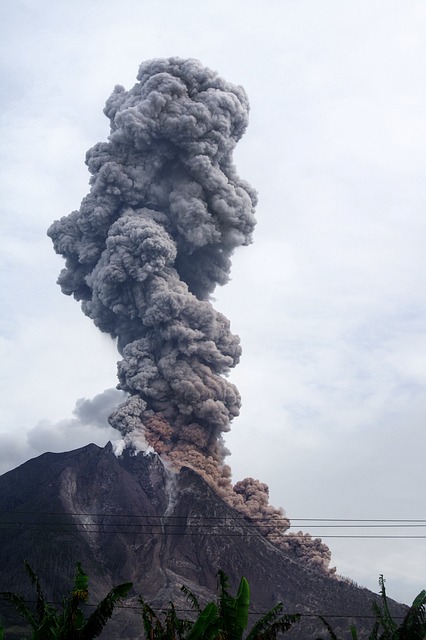 This is the Sumatran volcano that gave you all those pyroclastic flow images five or six years ago.

I blogged about it in 2014, as did many other people, including experts, and the world’s photographers flocked to the site.

Eventually, I think, we all got volcano fatigue because Sinabung just would not stop doing those amazing explosions and pyroclastic run-outs, over and over again.

It was a disaster for local people. Villages were evacuated, and some had to be abandoned. In addition to some fatalities, particularly in 2014 and 2016, tens of thousands of people had to seek shelter.

Fortunately, that number has dwindled as survivors have moved on with their lives. But for many Indonesians near Sinabung, home is gone forever.

These days, Sinabung is having one of its quieter phases. It’s at level 3 alert, on a 1-4 scale.

But as its human neighbors know, this volcano still reserves the right to explode unexpectedly.

The intermittent brightness seen in this video before dawn must have been a thunderstorm. Reportedly, this eruption — the last big one so far — caused no casualties or damage. There are exclusion zones at Sinabung and other volcanoes for precisely this reason. Many of Sinabung’s victims got too close during a pause in activity when the volcano appeared “safe.”

Here is the August 2, 2019, Sinabung update (via Google Translate):

I added that correction, since most machine translators interpret “lahar” as “lava” — it’s actually a cement-like mudflow. In 2016, people died from lahars as well as pyroclastic flows at Sinabung.

And here is my own favorite collection of videos from 2014, when the name “Sinabung” meant “pyroclastic flow” to much of the world.

Yes, it’s the one with tornado-like “ash whirls” but there are plenty of other amazing sights in it.

This will help you understand these flows better, though it’s a bit technical. In his book “Eruptions That Changed The World,” volcanologist Clive Oppenheimer (who appears in Warner Herzog’s Netflix film on volcanoes) goes into fascinating detail about what’s going on in these soaring ‘phoenix clouds,’ as he calls them.