The supereruption of Toba 74,000 years ago was awesome.

Today Lake Toba is the site of another impressive but much more slowly unfolding natural event.

This paraglider caught an up-close moment of it in 2016.

Whee! Look closely and you might see that some of the trees have broad leaves — hardwoods — while others, like the one he gets superclose to on the left at around the 1:50 mark, are pines (a/k/a conifers).

To us, it’s a pretty scene.

But in terms of the green world, that’s a battlefield.

The gorgeous landscape, after all, only exists because of incredible geological violence that happened here tens of millennia ago. Why shouldn’t the beings that naturally dominate it today have their own dramatic tale?

Even better, since it’s all about life finding ways to carry on, this story is not yet over.

At Lake Toba, if human settlements weren’t there to keep the trees apart, we’d be looking at more of the same branch-to-branch/root-to-root combat that’s going on in Sumatra’s wilder areas.

It’s not that hardwoods and conifers hate each other. As far as we know, plants are incapable of emotion.

But each one must get enough light, water, and nutrients to survive long enough to pass along its genes to a new generation. That means intense competition for limited resources.

And just because beings measure time differently and are rooted in the ground doesn’t mean that they don’t play for keeps when they have to.

Since flowering plants like those tropical hardwoods you see in the video arrived on the scene roughly 150 million years ago, they’ve taken out at least one of the world’s major conifer families.

But as a class, conifers (literally, “cone bearers”) are survivors, too.

They’ve been around for almost 300 million years and know how to play the game. In fact, the pine family Pinaceae dominates the Northern Hemisphere.

So what, you might be saying. Pines are all over the world.

Only they’re not. Pines keep to the Northern Hemisphere, and according to fossil evidence, have done so for at least the last hundred million years.

Pinus markusii, the species in that video, is the one exception.

It holds a world record as the only native pine in the Southern Hemisphere. (Of course, there are plantations, too, since this tree’s resin is very valuable, but we’re talking about natural forests here — and those only exist on Sumatra.)

As a family, pine trees are adapted to cool, dry climates and handle freezing temperatures, drought, and poor soil better than many other trees can.

This is why Pinaceae owns the Northern Hemisphere conifer niche.

However, pines can’t handle the sort of shade that tropical forests throw.

That’s probably why the family hasn’t extended its range south of the Equator, despite there being a few places open to vegetation where temperatures drop below freezing.

Even Sumatran pines only venture down to about 2 degrees South latitude.

Instead of Pinaceae, another type of conifer holds sway in the Southern Hemisphere, where less land and more ocean water means more moderate temperatures (and therefore more of a crowd).

It’s the family Podocarpaceae, or podocarps — a delightful word.

Podocarps have all the typical coniferous grit required to handle drought, poor soil, and other extreme conditions. It serves them well.

But because they face so much competition, podocarps have also evolved features, like broad flat leaves instead of needles, that enable them to live in the rainforest.

In the land-rich, chillier North, pines can afford to be more passive aggressive.

They just shift their geographic range towards the Arctic when Earth is in a warm climate phase and sit there, withstanding killing frosts and long winters like it ain’t no thang. Then, when things warm up, they move south and aggressively compete for more territory in the middle latitudes. (Brodribb et al.)

Yes, these trees did very well during the ice ages. That may possibly explain how pines got to Sumatra in the first place, though the details aren’t yet well understood.

But ice ages only go back 2-3 million years. Researchers who have studied fossilized plants and pollen suggest that the family Pinaceae has been pulling off this Arctic shuffle for at least the last hundred million years. (Brodribb et al.)

In fact, they may have been in cooler climes when flowering plants first appeared during the Cretaceous period.

Earth was a greenhouse back then. There were lots of other conifers around, including Araucaria and the family Cheirolepidiaceae. Among the other munchies for veggie dinosaurs in those days were things that looked like palm trees but weren’t (technically, cycads), ginkgoes, and ferns. (He et al.; Sanders et al)

When something, perhaps a whole genome duplication (Jiao et al.; Ruprecht et al.), led to flowering plants, this all changed.

These newcomers probably didn’t kill off the dinosaurs, but they did pass along their genes in novel ways that gave them several evolutionary advantages over plants like conifers and other gymnosperms that had been ruling the green world since the Triassic.

The competition began (and has not yet ceased). Plants either adapted or, like Cheirolepidiaceae, went extinct.

Those cheirolepids had lived at lower latitudes (Brodribb et al.), in the tropics that were also Ground Zero for most flowering plants. (He et al.; Sweet)

Pines, wherever they were cooling their roots farther north, might have missed it all. They may have never had to confront the early challenges that flowering plants brought to the rest of the world’s Cretaceous plants. (Brodribb et al.; He et al.)

But all life on Earth had to deal with the complex events that caused a major mass extinction at the end of the Cretaceous period.

There isn’t much fossil evidence of how the K/T (or K/Pg) extinction affected plants, but studies based on mid-continental North American data suggest that, while a few conifers disappeared, insect-pollinated flowering plants were hardest hit, at least in this part of the world. (McElwain and Punyaseng; Sweet)

And that’s about all anyone knows right now. But the modern world we see around us today somehow developed out of those smoking ruins 66 million years ago.

It’s really hard for most of us to get excited about trees. At the same time, though, we can sense a few echoes of their amazing history.

This is a Sumatra pine plantation, where the trees are tapped for resin. If done right,this is a sustainable industry.

What stories we would hear, if only plants and people spoke the same language!

Cats are a little bit closer to our ken (though not much, as dog lovers are quick to point out). And to the ever practical family Felidae, these mysterious woods are simply good hunting grounds and useful vertical escape routes.

Out there are many of the big and small cats we have looked at recently. But now it’s time for the last four Asian cat posts.

This Friday, we’re going to meet the first of two small cats here who aren’t afraid to get their feet wet. Then, before moving into the New World, we’ll encounter Southeast Asia’s other two big cats.

Sweet, A. R. 2001. Plants, a yardstick for measuring the environmental consequences of the Cretaceous-Tertiary boundary event. Geoscience Canada. 28(3): 127-138. 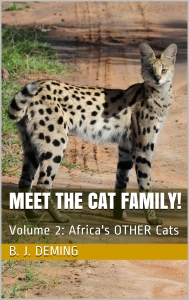