For drama, you can’t beat that one explanation of the K/T extinction: A giant asteroid smacks into the Gulf of Mexico, causing the equivalent of our greatest fear (global nuclear war, minus radiation) and knocking over the dinosaurs like so many bowling pins.


So why are a number of scientists proposing something different, that the massive Chicxulub impact happened…a-a-a-and the dinos went on living for at least another 120,000 years?

It’s not easy for a layperson to find out.

Extinction is a difficult topic

I love the nonavian dinosaurs and want to know what caused their demise.


If my beloved hadrosaurs were killed off by something from space, it might happen again – to us! If it depended on Earth conditions in the past, though, the future gets much harder to predict.

Experts aren’t in agreement about what causes mass extinctions.

And heaven help the lay writer, curious about any science topic, who wanders through the various “camps” and inadvertently steps on somebody’s toes! Yet what else can a lay writer, who doesn’t want to become somebody’s student or pawn, do but wander?

Scientists, like all other powerful people, control the press by selling access. I would rather not get into all that.

Heaven also help the reader of any general mass media report about extinction (including this one) who assumes that they’re reading the last word on the subject.

This series may or may not have some serious gaps. I’m not qualified to accurately sample the literature and so I have selected sources based on what I could find that answered my own curiosity.

Utility has always been the byword of geoscience, so that’s okay for our purpose here, which is wonder.

I would have skipped this topic if it only focused on physics, inorganic chemistry, or the like. It’s geology, though, and that science is accessible to all.

Everybody enjoys watching volcanoes or hearing about earthquakes. We have all wondered at the different textures and sometimes complex patterns of rocks, as well as the fossil remains and tracks that have been frozen in stone.

Geology is a discipline that both trained scientists and amateurs can share, up to a point. The problem is deciding what is the right point.

This three-part series on mass extinctions and their causes may overstep that point or it might be spot on. You will have to decide for yourself.

Today we’re going to take a look at asteroid impacts and the K/T extinction. Next we’ll explore other explanations for Earth’s mass extinction. Finally we’ll try to put it all together.

In 1980, scientists Luis and Walter Alvarez, Frank Asaro, and Helen Michel claimed that they had found evidence of a giant impact in a thin geologic layer known as the K/T boundary.

Quite a few of the Cretaceous fossils below the K/T line, which dates back some 66 million years, never appear again above it, in the Tertiary.


I suspect that the claim didn’t go over too well at first because earth scientists were unwilling to lapse back into catastrophism.

After all, ever since Charles Lyell and others had established the theory of gradualism – that little things can cause big geologic changes, given enough time – the natural sciences had made great progress for more than a century.

Why change it now?

Well, there’s nothing in gradualism that completely rules out the occasional massive disaster. A crisis of faith wasn’t needed to accept the new proposal – just a simple admission that sometimes stuff happens to Earth, just as it does on the human scale.

Perhaps what really moved things along was that now everybody knew that a global catastrophe could occur, thanks to models of the effects of nuclear war.

If humanity could do that to the planet, why not Nature?

Minds were open to acceptance of the impact theory, but what would really clinch it would be discovery of the “smoking gun” crater.

Researchers went into the field to find it. Meanwhile, back in the office, others thought about what actually could happen if a large asteroid hit Earth.

When a space object is big enough to pass through Earth’s atmosphere without burning up, it will form one of two types of craters when it hits land.

Smaller objects, like the 100- to 165-foot meteorite that left behind Barringer Crater in Arizona, basically make a bowl-shaped hole in the ground. Larger objects make complex structures that have a raised central peak and ring-like terraces.

There can be even bigger craters, but so far none has been recognized on Earth.

The University of Arizona modeled a K/T-level impact:


What happens to Earth after that impact?

Here is current thinking on that from Stephen A. Nelson of Tulane University:

… we as humans have no firsthand knowledge of what the effects of an impact of a large meteorite (> 1 km in size) or comet would be. Still, calculations can be made and scaled experiments can be conducted to estimate the effects. The general consensus is summarized here.

Massive earthquake – up to Richter Magnitude 13, and numerous large magnitude aftershocks would result from the impact of a large object with the Earth.

The large quantities of dust put into the atmosphere would block incoming solar radiation. The dust could take months to settle back to the surface. Meanwhile, the Earth would be in a state of continual darkness, and temperatures would drop throughout the world, generating global winter like conditions. A similar effect has been postulated for the aftermath of a nuclear war (termed a nuclear winter). Blockage of solar radiation would also diminish the ability of photosynthetic organisms, like plants, to photosynthesize. Since photosynthetic organisms are the base of the food chain, this would seriously disrupt all ecosystems.

Widespread wildfires ignited by radiation from the fireball as the object passed through the atmosphere would be generated. Smoke from these fires would further block solar radiation to enhance the cooling effect and further disrupt photosynthesis.

If the impact occurred in the oceans, a large steam cloud would be produced by the sudden evaporation of the seawater. This water vapor and CO2 would remain in the atmosphere long after the dust settles. Both of these gases are greenhouse gases which scatter solar radiation and create a warming effect. Thus, after the initial global cooling, the atmosphere would undergo global warming for many years after the impact.

If the impact occurred in the oceans, giant tsunami would be generated. For a 10 km-diameter object the leading edge would hit the seafloor of the deep ocean basins before the top of the object had reached sea level. The tsunami from such an impact is estimated to produce waves from 1 to 3 km high. These could easily flood the interior of continents.

In the early 90s they finally found the Chicxulub crater at the edge of the Yucatan Peninsula. It was the right size and apparently had hit at the right time to cause the K/T extinction. Case closed.

It even seemed possible that asteroid and/or comet impacts had caused all the mass extinctions!


However, the case wasn’t really closed.

When you have a lot of researchers out in the field, they tend to come across interesting things that they aren’t expecting to find.

The long and the short of it is that by now enough evidence has been collected to raise questions in at least some scientific minds about the connection between the Chicxulub crater and the K/T extinction, as well as whether asteroid impacts can actually cause mass extinctions all by themselves.

To date, experts have found evidence of many impact events and many extinctions – not just the “Big Five” (which include the K/T die-off).

The cause for all this uncertainty is an incomplete geologic record. Rocks erode or are buried. They shift around, thanks to plate tectonics, and sometimes may melt or be deformed beyond recognition.


Occasionally an extinction is obvious, as with the “Big Five.”

More often, there is just a jumble of clues in geologic deposits that experts have to interpret by the light of current knowledge and with their own reasoning abilities.

It all inevitably leads to differences of opinion about mass extinctions and impact craters that can be very confusing to a layperson.

Just for consistency in this article, we’re going to look at things through the eyes of a single group of scientists – Gerta Keller at al., who wrote a paper published by the Geologic Society of London.

I chose them because of their chart of mass extinctions and asteroid impacts. Here are two of the three columns:

As you can see, they’ve identified many extinctions in the left-hand column.

So, just looking at the chart, can you definitely say that impacts and extinctions are related?

Maybe they are, maybe not.

In the opinion of Keller at al., the Chicxulub impact happened 120,000 years before the K/T extinction. It just touches the K/T line here because it is a big crater.

This is not what you have probably read about or seen on TV.

The link between the K/T extinction and a huge impact is generally accepted. Beyond that, there’s no consensus.

Here is their complete chart: 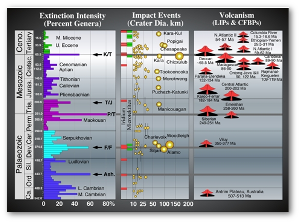 During the K/T extinction, according to Keller et al., Earth’s life forms were tremendously stressed because of climate change caused by basalt flooding.

Imagine a giant flood, only it’s runny lava instead of water and it goes on for millions of years. The picture above shows a tiny part of the Columbia River Flood Basalts. Keller at al. were thinking of the much larger Deccan Traps, which did happen around the right time.

Then the Chicxulub impact delivered the coup de grace.

It sounds convincing to me. However, not all scientists agree with Keller.

Sankar Chatterjee et al., of Texas Tech University, for example, argue (PDF) that there are several other huge craters that happened at the right time, including the Boltysh crater of the Ukraine, the Silverpit crater in the North Sea, and the gigantic Shiva crater near India that caused several different kinds of trouble.

Keller’s group doesn’t include those craters in the chart. Chatterjee’s group says that life was getting along fairly well during the Deccan flooding, even right on top of the cooled lava, until a multiple-bolide strike on Earth occurred.

I have no idea who is closest to what actually happened.

Are we projecting our fears onto the dinosaurs, first imagining a nuclear winter scenario for their demise, and now the current bogy of climate change?


Of course we are. It’s human nature to project our worst fears.

Gradualism favors rationality over emotion and so may help us work away from the process of projection and toward the truth.


Ancient rocks tell an incomplete story, but there have clearly been multiple extinctions over Earth’s history. We don’t know for sure what caused them or how life survived and ultimately recovered.

So…what caused these events, if not catastrophe?

Next week, we’ll take a look at some gradualist explanations that have been proposed for mass extinction. Finally, we’ll see where chaos fits in.